Victor was a loyal henchman of Gustavo Fring and prominent enforcer in Gus' Drug Empire alongside Mike Ehrmantraut. He was ultimately murdered by his boss after being seen at the scene of Gale Boetticher's murder.

While Mike is staking out Los Pollos Hermanos from across the street, he sees Victor drive into the restaurant and park out back. A moment later, he drives off, carrying Mike's tracker. Mike follows Victor's Escalade out into the desert, until he finds his tracker abandoned in the road, with a gas cap and a ringing cell phone. ("Witness") Victor and Tyrus Kitt are shown to be co-enforcers who serve as Gus's muscle while Gus speaks with Mike.

Victor and Tyrus are facilitating a money transfer at Los Pollos Hermanos distribution center. Arturo, collecting money for the Salamancas accompanied with Nacho, demands five kilos of drugs like last time. Nacho pulls out a pistol and cocks it to threaten Victor and Tyrus, who seemingly give in to the demand. While the two walk out with the extra kilo of drugs, Gus Fring and his assistants walk out of the shadows and Gus pulls a plastic bag over Arturo's head and while Victor and the rest of the men force him to the ground and apply zip ties to his wrists and ankles. While Arturo suffocates to death, Gus warns Nacho that he knows he switched Hector's medication with poison and that "you are mine." ("Breathe")

Victor takes part in covering up Arturo's murder and wounds Nacho to "make it look real" when the cartel sends people to investigate. ("Something Beautiful")

After Diego escapes DEA agents Hank Schrader and Steven Gomez, he is picked up by Victor who then calls Gus to report on the situation. ("Namaste")

Alongside Tyrus Kitt, Victor picks up Saul Goodman and Mike Ehrmantraut at a truck stop and drives them back to Albuquerque while, alongside Tyrus, explaining the aftermath of the desert ambush. Victor later tails Nacho and Lalo as Nacho drives Lalo to the border. ("Bad Choice Road")

Victor first appears as an apparent fellow customer in the Los Pollos Hermanos restaurant, where Walter White has come looking for Gustavo Fring. He suddenly confronts Walter and tersely conveys Gus's non-negotiable offer to purchase Walter's meth and arrange for delivery within the hour. Victor tells Walt that if he doesn't show up within the hour, to "never show his face" at Los Pollos again. ("Mandala")

Victor continues his work under Gus. He delivers a message from Mike Ehrmantraut to Gus that The Cousins are about to murder Walt at his home. ("Caballo Sin Nombre")

When Jesse Pinkman decides to start cooking again and is looking for a buyer of his new product, Gus sends Victor to deliver the money. When Jesse complains that it's only half of the amount agreed upon, Victor tells him, "That's your half." Later that day, Walt is sitting in his car at a red light. Victor pulls up next to him and tosses a bag of cash in his window, telling the confused Walt, "Your half," before driving away. ("Green Light") It is revealed that Gus instructed Victor to give half of the money for Jesse's meth to Walter as a way to convince Walter to cook again.

When Walt decides that Gale Boetticher isn't going to work out as his assistant at the superlab, it's Victor who escorts in Gale's replacement, Jesse. As Gale and Victor make their exit, Walt, guilt stricken, assures Victor that this decision is for the best. Victor coldly reminds him, "200 pounds a week. Got it?". ("I See You")

After discovering Jesse is planning to murder two of his "trusted employees," Gus sends Victor and Mike to retrieve him and bring him to his chicken farm. There, a meeting is held between Jesse, the rival dealers, Walt, and Gus with Victor and Mike merely observing. ("Half Measures")

After Walt kills two of Gus's dealers, Walt tells Gus that Jesse is "at least two time zones away." Victor guards the lab at all times when Walter and Gale are present and monitors their conversations. Walt suspects Gus is preparing to kill him, and conspires with Jesse in secret to kill Gale, making Walt indispensable as the only remaining cook.

Victor later catches Walt sneaking out of his house to murder his replacement, Gale, telling him there's "a chemical leak in the lab". Walt reluctantly goes along and is greeted by Mike when he arrives; he deduces they plan to kill him. Walt begs Mike to spare him, offering to turn Jesse over. Under the pretext of contacting Jesse to lure him to a meeting, Walt convinces Mike and Victor to allow him to call Jesse using his cell phone. However, instead of arranging a meeting, Walt instructs Jesse to kill Gale before Mike kills Walt, leaving Walter as the only chemist available to Gus. Victor races to stop Jesse from killing Gale, but arrives too late. ("Full Measure")

Shortly after Gale's murder, Victor enters Gale's Apartment and is seen by neighbors, who are later revealed to have accurately described him to the authorities. Outside the apartment, Victor notices Jesse sitting in his car, apparently in shock. At gunpoint, Victor orders Jesse to go to the lab. There they join Walt and Mike.

It is revealed that while watching Walt cook, Victor closely studied the procedure and learned the process of cooking meth. He single-handedly gets a batch ready in front of a stewing Walt and a somber Jesse, and awaits Gus' arrival in the lab. Walt is visibly concerned that Victor proves to be better at the process than he expected. When his boss finally arrives, however, Gus coolly slices Victor's throat using a box cutter, shocking everyone at his macabre murder, including Mike. It's believed Gus chose Victor due to Victor exposing himself at the scene of Gale's murder and is now a risk to his organization. Walter and Jesse then dissolve his body in hydrofluoric acid along with the box cutter and the murder weapon used on Gale, echoing Walt and Jesse's previous experience with Emilio Koyama earlier in the series. ("Box Cutter")

When Mike lets Jesse ride shotgun, Jesse asks Mike if he has become "the guy" (Victor's replacement), which angered Mike to the point of stopping the car and telling Jesse that he, in fact, was not the guy. ("Shotgun")

Later, a composite sketch that closely resembles Victor is seen a couple of times, including by Gus when he is waiting to be questioned at the police station. ("Hermanos")

Walt mentions to Jesse that the reason Gus might have killed Victor is because of Victor taking liberties that weren't his, (cooking meth while Walt and Jesse were held hostage by Mike) and "flew too close to the sun" as Walt put it ("Hazard Pay").

The police sketch of Victor can also be seen on the DEA evidence board under the name "Unsub Bystander" showing that the police never managed to identify exactly who Victor is. ("Fifty-One")

Victor is shown to be a dedicated and loyal henchman of Gus, following his orders without question. A man of few words, he is shown to be extremely cautious, patient and observant. He is also extremely cruel and sadistic and is no stranger to murder as seen by him aiding Gus in restraining and killing Arturo and he surely would've killed Nacho Varga's father, Manuel, had Gus ordered him to. His sadism is evident by him remarking to a frightened Nacho after being ordered not to kill his father that he is a nice guy and also his facial expressions whilst seeing Gus prepare a box cutter to supposedly kill Walt and Jesse with. Victor is shown to be very intelligent as seen by him preparing a batch of meth in the superlab to prove his usefullness and prove that Walt and Jesse were no longer needed and even appeared to worry Walt himself momentarily after not missing a step of the complex process.

While intelligent, Victor himself is prone to mistakes as seen by him being spotted at Gale's murder scene and this mistake would ultimately cost him his life, as well as attempting to cook a batch of meth himself.

"Your pop's a nice guy."
―Victor to Nacho after getting orders not to kill his father[src]

"That's right genius. Watch me."
―Victor to Walter about cooking a batch of meth himself.[src]

"I've been thinking about Victor. All this time, I was sure that Gus did what he did to send me a message. Maybe there's another reason. Victor trying to cook that batch on his own, taking liberties that weren't his to take. Maybe he flew too close to the sun and got his throat cut."
―Walt to Jesse about Victor, while referencing Mike's actions.[src] 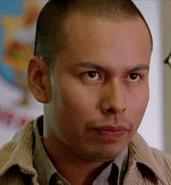 The box cutter prop that was used to kill Victor.

Victor as seen on the DEA evidence board

Retrieved from "https://breakingbad.fandom.com/wiki/Victor?oldid=107979"
Community content is available under CC-BY-SA unless otherwise noted.