The episode opens in a flashback to the 1970s, as a young boy watches his father pour cement in his driveway. The father allows the boy to sign his name in the wet cement, revealing them to be Mike and his son Matt, respectively. The scene abruptly cuts to Mike at Stacey's support group, which has apparently been stunned into silence. He coldly states, "You wanted me to talk. I talked."

At night, a car drives to a dilapidated motel, and a man, Diego, steps out with a suitcase. Diego walks through the motel, which serves as a compound for the Espinosas, a competing drug gang to the Salamancas. He is allowed into the gang's lair, where one of the Espinosas take a packet of drugs out of the suitcase. Diego returns to the car and tells Victor the delivery is done.

In the morning, Jimmy gets a call from CC Mobile, a cell phone retailer, and is offered a job as a shift supervisor for their location in uptown Albuquerque. Jimmy turns down the job, saying he's had a "change of plans." Later, while Jimmy is shaving, Kim gives him the contact information of a therapist and urges him to talk to someone, presumably about Chuck's death. Perturbed, Jimmy lies to Kim about taking the CC Mobile job. After she leaves, he calls them back to say he has reconsidered and will take the job.

At the courthouse, Kim observes a pre-trial hearing and is asked by the judge, Benedict Munsinger, to visit him in his chambers. Munsinger gleans that Kim is trying to rediscover her love of the law, and tells her about a family that is suing a hospital over a botched childbirth that left the mother brain damaged. Kim realizes that he is describing the plot from The Verdict. Munsinger tells Kim that the cases he deals with every day are much less glamorous and career-altering than the ones seen in movies, and implies he will put her to work for the public defender if he finds her "trolling in his court" again. Taking the judge at his word, Kim defiantly returns to the courtroom and continues watching hearings.

At Loyola's, Mike is solving newspaper crosswords. Anita steps in and approaches his booth. During their conversation, she asks him to befriend another member of the support group, Henry DeVore, who relates stories of his dead wife, named Judy. Mike says that Henry is making up Judy, pointing to a discrepancy in his story about their purported first kiss at Wrigley Field. When Anita expresses disbelief, Mike advises to her to look for Henry to give a tell -- rubbing his wrists -- when he talks about Judy at the next group meeting. The two agree to a ten dollar bet on whether he does so.

Jimmy begins his job at CC Mobile, but quickly becomes bored when no customers show up. He takes a call from his new boss, Robbie, and asks to be transferred to a store with better foot traffic, only to be told that all of the company's other positions have been occupied. With nothing else left to do, Jimmy begins throwing a rubber ball against the storefront window to pass the time.

Meanwhile, Nacho and the Cousins watch a silver Firebird -- the type of car Nacho "described" as having ambushed him and Arturo -- pull into the Espinosa compound. Nacho verbally describes a plan to use a couple of Salamanca crews for a night assault, but the Cousins choose to act immediately. He watches as they kill the guards and enter the compound with guns drawn. A massive offscreen gunfight erupts and reinforcements for the Espinosas arrive. Nacho, still injured from being shot by Victor, reluctantly joins the gunfight. Coming up from behind, he kills one of the Espinosas. Inside the compound, he finds that the Cousins have slaughtered almost everyone. Nacho prepares to rescue Leonel from a couple of gunmen who have pinned him down, but Marco appears and kills them instead, taking a bullet to the left shoulder. Leonel retrieves the packet of drugs -- delivered by Gus' men earlier to frame them for the "ambush" and the three leave the scene.

At an abandoned warehouse, Nacho informs Gus that the Espinosas have been wiped out and that the Cousins have gone south until the heat dies down. Nacho verbally surmises that Gus engineered the situation to his advantage, destroying the Espinosas with the expectation that the cartel will give him their territory. Gus simply tells Nacho to get some rest, as he has some work to do.

At the group meeting, Stacey recounts her day with Kaylee, saying that she has realized that she has started going about her daily routines without constantly thinking of Matt. She expresses fear that this means she will forget details about Matt in life, which visibly affects Mike sitting next to her. Henry begins talking about Judy and rubs his wrists, just as Mike predicted. Eventually, Mike can no longer contain his anger and accuses Henry of lying about Judy, pointing to more inconsistencies in his stories and challenging him to show any official record that she ever existed. Instead of denying it, Henry leaves the meeting. Mike then turns his ire on the rest of the group, saying that all they're really doing is feeding on each other's misery. The scene ends with Mike saying his line from the teaser: "You wanted me to talk. I talked."

Nacho's father Manuel arrives home to find his back door open. Inside, he finds a bandaged Nacho sitting in his living room. Manuel moves to call the hospital, but Nacho tells him it won't be safe if he does so. He asks his father if he can rest at the house for a while. The following day, Mike is performing another security check at a Madrigal warehouse when Stacey tries to contact him on his cell phone; he ignores the call. However, he is forced to take a call from Victor, who says that Gus wants to meet him that night.

Jimmy leaves CC Mobile and drives to a construction business, where Ira is performing his legitimate job stocking vending machines. When Ira hands Jimmy the proceeds he collected from selling Mr. Neff's Hummel figurine, Jimmy is surprised to find out that the caper has yielded more returns than he expected. Ira invites Jimmy to approach him again when he finds another job, and tells him to contact him through Caldera with a new phone when he does, saying, "You never know who's listening." Struck by inspiration, Jimmy returns to CC Mobile and paints the message "IS THE MAN LISTENING? PRIVACY SOLD HERE" on the store windows.

After dark, Mike drives to the Los Pollos Hermanos factory farm. Gus, flanked by Victor and Tyrus, confronts Mike with the knowledge that he was aware of Nacho's plot against Hector and did not act to stop him. Mike counters that he agreed to not kill Hector, but never agreed to keep others from doing so. He further realizes that Gus has actually summoned him because he has a new job, and asks Gus to state point blank what it is.

Kim: "This is the plot of The Verdict."
Judge: "Yes. Of course it is. Because movies are the only place where those once-in-a-lifetime cases exist. You know what I got coming up next? A janitor who threw his pee on his boss. The one after that, she stabbed her boyfriend over a grilled-cheese sandwish. This is the real world, Ms. Wexler, and you won't find any save-the-broken-lawyer cases in it. Don't think you're the first to try to rediscover their love of the law by trolling my court, you're not. The best thing you can do is stick to Mesa Verde. Make lots of money. Give some to charity. Having said that, we've got perpetual PD overload. So beware. Next time I see you lurking in my court, I'm gonna put you to work."
Kim: "Understood."
―Benedict Munsinger to Kim about her presence in his court.

"Fucking Salamancas."
―Nacho about the Cousins ​​attacking the Espinosas compound without waiting for reinforcement.

Nacho: "We cleared out the Espinosas. They're all done."
Gus: "And the Salamancas brothers?"
Nacho: "Marco took a hit but he'll pull through. They went back south until the heat dies down. It's territory, isn't it. The Salamancas wipe out the Espinosas, Espinosa territory is up for grabs. Cartel can't give it to the Salamancas, so... I think they give it to you."
Gus: "Get some rest. You have more to do."
―Nacho debrief the eradication of Espinosas to Gus.

Mike: "This guy was never married."
Henry: "What are you talking about?"
Group Leader: "Mike, you know the rules--"
Mike: "I know your rules. He's been coming in here for months, selling you a bill of goods, getting you all misty-eyed and loving every minute of it."
Stacey: "Pop."
Mike: "Stop."
Henry: "That's... just not true."
Mike: "Yeah? Okay. So I'll go to the public library and I'll get the papers from 1997 and I'll run a search on Judy DeVore, beloved wife of Henry DeVore. Tell me I'll find her obituary. She wanted to go to Australia? Last month, it was Cuba. Come on, Henry. Let's look at the papers. See if the math works."
―Mike unmasking Henry DeVore.

Jimmy: "We're gonna do this again. I'll find something."
Ira: "Sounds good. When you do, call the vet."
Jimmy: "Yeah?"
Ira: "Yeah. New job, new phone. You never know who's listening."
―Jimmy having the idea of ​​his next business thanks to Ira.

Mike: "You wanted to see me, here I am."
Gus: "In order for our arrangement to continue, there is a matter we need to discuss."
Mike: "Okay."
Gus: "Do you have something to tell me? If you do, you would be well-advised to do so."
Mike: "Nacho Varga. I wondered when you were gonna get around to this."
Gus: "You came to me. You asked for a favor. You looked me in the eye, you shook my hand. And all the while, you knew Varga was moving against my interests."
Mike: "I said I wouldn't kill Salamanca. I never promised to be his bodyguard. So... what now? If you're gonna make a move, you better make it. But they're not gonna, are they? You brought me here because you have an ask. So why don't you stop running a game on me and just tell me about the job?"
―Gus testing Mike. 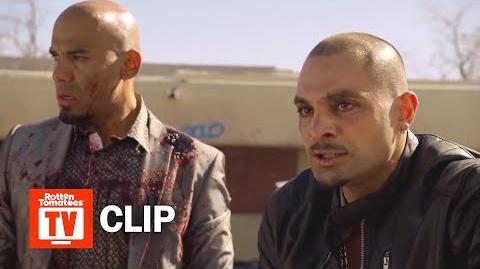