Criminal
Sobchak is a loudmouth criminal/private investigator who uses the professional name of Mr. X. He was considered for hire as a bodyguard for Pryce and was hired by Kim and Jimmy to find dirt on Kevin Wachtell.

Sobchak learns that Mike Ehrmantraut isn't carrying a gun and recommends that Pryce split more money between himself and Clarence as Mike didn't even come armed to the meeting. A standoff occurs between both men when Mike claims that if he needs a gun, he'll simply take one of his and Sobchak aims his pistol at Mike's head, taunting him to take it from him. Mike disarms Sobchak and clubs him in the trachea with the butt of the gun, sending Sobchak to the ground and clutching his throat as he gasps for air. Mike then takes all of his weapons, asking Clarence if he wants one, and Clarence responds by fleeing. Mike then throws all of the weapons into a trash can before leaving for the drug-deal with Pryce. ("Pimento")

Jimmy discovers Sobchak through underground connections, the same way he found Huell. Sobchak now goes by the name "Mr. X" and is hired by Jimmy to gather information on Kevin Wachtell that might help Jimmy and Kim to build a case against Mesa Verde. He breaks into Kevin's house and takes photos of his home office and the documents he finds there. He expresses his disappointment with his findings when he meets with Jimmy and Kim in the nail salon and proposes that he and two of his guys could just kidnap Kevin and "take him out to the desert" to squeeze more information out of him. Jimmy and Kim are both displeased with this proposal and ask him to leave. ("Dedicado a Max") 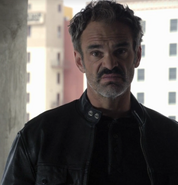 Retrieved from "https://breakingbad.fandom.com/wiki/Sobchak?oldid=105043"
Community content is available under CC-BY-SA unless otherwise noted.