In present-day Omaha, "Gene" is wheeled out of the Cinnabon by paramedics following his fainting spell. At the hospital, he is given a clean bill of health and prepares to be released. However, "Gene" is held up by the nurse at the front desk, who is having trouble entering his fake ID and Social Security numbers into a computer. "Gene" becomes nervous at the possible exposure of his true identity. The nurse realizes she has mistyped the numbers, and when they go through, she allows "Gene" to leave.

"Gene" tries to take a taxi back to the mall, but spots an air freshener bearing the logo of the Albuquerque Isotopes baseball team hanging from the cab's rear-view mirror. He further notices the cabbie staring intently at him, as if he recognizes him, to the point that he doesn't drive through a green light. "Gene" asks to be let out in a residential neighborhood. As he walks away -- at one point kneeling down to pretend to tie his shoes -- "Gene" sees that the taxi doesn't drive off.

In 2003, Jimmy wakes up in bed next to Kim and begins his morning routine. While he is circling job ads in the newspaper, he receives a call on his cell phone from Howard that he doesn't answer. As Jimmy helps Kim with her arm cast, Howard leaves a message on her voicemail informing them of Chuck's death in the house fire. Jimmy and Kim race to the fire-gutted ruins of Chuck's house, where Jimmy sees the coroner's van carrying Chuck's body drive away. After talking to the fire inspector, Kim tells Jimmy that the fire was caused by a knocked-over lantern and that Chuck died from smoke inhalation. Jimmy notes the electrical appliances strewn in Chuck's backyard and, recalling their last encounter, realizes that something triggered a relapse in his EHS delusion in the time between then and the fire.

After he ends his final shift at the parking booth, Mike plays with Kaylee as she tends to the garden in his backyard. Stacey arrives to pick up Kaylee, and Mike tells her that he can pick up Kaylee for her for the rest of the week since he can "keep his own hours" with his new job. He receives his first paycheck from Madrigal Electromotive and sees that his net pay is over $10,000. As he watches baseball on TV, Mike gets restless and makes a phone call to ask for Madrigal's address in Las Cruces.

Meanwhile, Chuck's death puts Jimmy in a depressed mood. Kim finds him staring blankly at the sink and hands him the phone; Howard is asking for feedback on Chuck's planned obituary. As Howard recites a summary of Chuck's career and accomplishments, Jimmy puts the phone down and sits quietly in the living room. Kim approves the obituary on Jimmy's behalf and sits next to him, offering shots from their Zafiro Añejo tequila bottle. Jimmy drinks one shot and continues sitting silently, while Kim eventually finishes the bottle and falls asleep.

Immediately after Hector is driven away in an ambulance, Nacho is left standing in the lot of the upholstery shop with Gus. As Gus makes a call on his cell phone to Juan Bolsa, Nacho sees a broken sewer grate on the ground and moves to covertly drop his vial of tainted pills into it. However, he has to abort when Gus ends the call and tells him that Bolsa wants a word. At the Los Pollos Hermanos chicken farm, Bolsa tells Nacho and Arturo that the Salamancas will keep their territory despite Hector's apparent stroke and instructs the pair to continue working as before. After Nacho and Arturo are dismissed, Bolsa confers with Gus, who believes that someone will make a move on the Salamancas that will trigger a drug war and draw in the DEA. Meanwhile, Nacho drives to a bridge and dumps the pills into a river. Unbeknownst to him, he is being watched by Victor, who has placed a tracker on Nacho's vehicle.

Before he can drive to work, Barry Hedberg, the floor supervisor at Madrigal's Las Cruces warehouse, finds that his car won't start and that his ID card is missing. As it turns out, Mike has broken into Barry's car, drained the battery, and stolen his ID to infiltrate the warehouse. As he drives around the facility on a golf cart, he interacts with several workers, looks over inventory, and ruffles through trash. After he tracks down Barry and returns the ID card, Mike speaks with the office manager and identifies himself as a "security consultant," listing the many potential breaches he has found at the warehouse. When the manager is incredulous, Mike tells him to contact Madrigal's corporate office and ask for Lydia.

Jimmy attends Chuck's funeral with Kim, and is offered condolences by Cliff, Rich, Brian, and Brenda. The only people who don't approach him are Howard and Chuck's ex-wife, Rebecca. When they arrive home from the funeral, Jimmy and Kim find Howard sitting on the curb outside their apartment. Inside, he tells them that he thinks Chuck committed suicide, explaining how he was forced out of HHM when he threatened to sue the firm's insurer for raising their rates over his mental illness. Howard, unaware of Jimmy's role in the insurance incident, blames himself for Chuck's death. Jimmy coldly replies that that's "your cross to bear." Howard and Kim are stunned as Jimmy nonchalantly feeds his fish and makes coffee.

"Did you see the backyard? His microwave, his stereo, his lights... dishwasher, all the kitchen stuff... everything electric is back there. The firemen didn't do that. He did that. I saw him five days ago. He was listening to jazz. All the lights worked. He was himself. Someting must've happened. Something made him relapse."
―Jimmy to Kim about Chuck's death.

Juan Bolsa: "The old bastard, he's always been trouble. But he keeps his house in order. Gustavo, what do you think?"
Gus: "Someone will move against the Salamancas. Which brings war. Which brings chaos. Which brings the DEA."
―Juan Bolsa and Gus about the consequences of Hector's stroke.

Mike: "I waltz through security with someone else's ID. Nobody gives me a second look. When the rightful owner shows up, there's no facility-wide badge check. I find access doors left unlocked or propped open, passwords written on Post-it notes. Warehouse workers are using pen and paper instead of electronic inventory devices, which leaves you wide open to pilfering. You got duplicate routing numbers on cargo, surveillance camera blind spots on the north and the east side of the floor, inventory documents that are going into the trash instead of being shredded, not to mention loading equipment being driven at unsafe speeds and crews disregarding safe..."
Madrigal manager: "Wait. Wait. Hold on. Hold on. Who are you, exactly?"
Mike: "Ehrmantraut. Security consultant."
Madrigal manager: "Well, all due respect, I don't know anything about a security consultant."
Mike: "Well, you wouldn't, would you? Maybe you'd best call corporate. Try Lydia Rodarte-Quayle."
―Mike taking his role of security consultant a little too seriously.

Jimmy: "What about the insurance?"
Howard: "It was our malpractice insurance. They found out about Chuck's condition, raised our rates. Chuck went ballistic, he wanted to go to war. I drew a line. He wouldn't back down. So I forced him out. Never occurred to me that I could hurt him. He always seemed so strong. But he wasn't. I think he did what he did because of me."
Jimmy: "Well, Howard, I guess that's your cross to bear."
―Howard confides in Jimmy about his possible responsibility for Chuck's suicide. 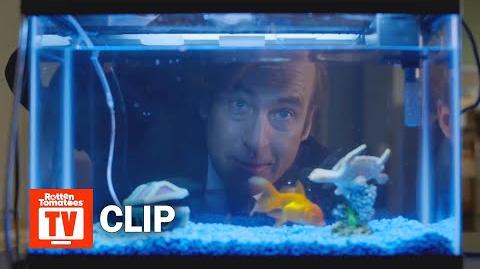