The sixth and final season of the American television drama series Better Call Saul was announced on January 16, 2020. It is split into two parts; the first seven episodes aired from April 18 to May 23, and the final six will air from July 11 to August 15, 2022.

Production for season 6 was postponed due to COVID-19 pandemic restrictions; filming officially began in March 2021.[1] The season consists of thirteen episodes, each running approximately 47 minutes in length. Vince Gilligan made a return to the creative team after being absent for seasons 3 to 5.

Nacho Varga makes it out of Lalo Salamanca's compound in Chihuahua alive, albeit running for his life in foreign territory. Lalo has survived the attempt on his life by Gus Fring's hitmen, and arrives at the home of Sylvia and Mateo Ramos, two of his renters. Lalo had previously paid for Mateo's dental work and unbeknownst to Mateo, Lalo altered his dental records so both Mateo's and his dental records looked the same. Lalo kills both of them, and moves the body of Mateo—whose appearance and dental forensics is similar to that of Lalo—to his compound, to make it appear as though Lalo died in the gunfight. Juan Bolsa later calls Gus to tell him the cartel is aware of Nacho's involvement in the raid of Lalo's compound. Gus then confers with Tyrus Kitt and Mike Ehrmantraut, expressing his doubts that the murder was actually a success. Meanwhile, Jimmy McGill runs into ADA Gina Khalil and Detective Tim Roberts at the Bernalillo County Courthouse; Gina and Tim confront Jimmy regarding the disappearance of Lalo after his release on bail under the pseudonym Jorge de Guzman. When threatening Gina and Tim with allegations of prosecutorial misconduct, Jimmy accidentally refers to Lalo by his real name.

Later, Kim Wexler and Jimmy hash out details of their plan to take down Howard Hamlin. Nacho eventually makes his way to a motel, finds a gun and money, and is told by Tyrus over the phone that he must shoot anyone who comes to the door. The next day, Jimmy moves to execute the plan: using the Saul Goodman alias, he enters a country club where Howard and Cliff are playing golf to slip something in Howard's locker. When it falls out in front of Howard's feet, it's a bag of white powder designed to look like cocaine. The two men dismiss it as a prank or a mistake, but Cliff can't help but look suspicious. Meanwhile, Lalo attempts to cross the border into the United States, and calls Hector Salamanca to tell him he believes Gus is responsible. When Hector advises his nephew to find proof the cartel will accept, he kills the coyotes who refuse to return his money, and stays in Mexico. ("Wine and Roses")

As the plan continues, Kim, looking for ways to make it seem more believable to Cliff, comes up with an idea she says Jimmy will hate: as it turns out, Craig and Betsy Kettleman are now running a shady tax preparation business in the middle of the desert. Jimmy goes to Sweet Liberty Tax Services—operating out of a mobile home—and tells a very displeased Betsy about a plan to exonerate Craig on the basis of improper counsel due to Howard's supposed cocaine addiction. He leads them to sign letters of engagement, but Betsy promptly fires Jimmy. Later, the Kettlemans show up at Davis & Main, telling Cliff, who denies them counsel, what Jimmy led them to believe about Howard. They talk to more lawyers, who all tell the Kettlemans there is no way to make an insufficiency of counsel case work under the circumstances. Kim and Jimmy both show up at Sweet Liberty; while Jimmy attempts to give them money, Kim stews in the background, and acts as the stick to Jimmy's carrot: she calls the IRS, tells them about the Kettlemans' scheme—giving smaller tax refunds than are owed to their customers and pocketing the difference—and threatens to have them investigated. The Kettlemans back off, but Jimmy and Kim have gotten exactly what they wanted from the arrangement.

Gus meets with Hector to offer his condolences over Lalo's death, not knowing Hector knows his nephew is alive, but Gus still receives indication from Hector, who locks eyes with him in an unusual manner during a handshake, that Lalo is alive. Meanwhile, Nacho continues to hide at Motel Ocotillo, eventually finding a hole in a structure across the parking lot from Nacho's window from which someone could potentially peek. He goes to investigate, leaving through the back window of his room, and finds a man surveilling him through the hole. He demands to know who the man works for, but he refuses to say; Nacho then calls Tyrus, feigning anxiety, and after a beat the man's phone rings. Realizing that Gus plans to sacrifice Nacho for his own sake, Nacho cold cocks the man with his pistol and steals a pickup truck. As he is about to leave the motel, cartel henchmen arrive and a shootout ensues; Leonel and Marco Salamanca later kill one of their own men who is trying to kill Nacho, seeing as the cartel wants to take him alive. Nacho charges at them with the truck, and after they barely evade him, he speeds away. The next day, Tyrus and Mike brief an agitated Gus on the situation at the chicken farm; Tyrus insists Lalo is dead, but Mike counters, offering to pick Nacho up from Mexico. Gus demands Nacho's father be brought to Gus, but this is too much for Mike, who openly disobeys him as Tyrus aims his pistol at his head. Mike receives a call from Nacho during this standoff, who asks to speak with Gus. ("Carrot and Stick")

Frantically attempting to rescue their plan, as Kim drives back to Albuquerque, Jimmy nabs Lenny from the grocery store and collects Joey from a class he's teaching on filmography at UNM. Kim arrives, and new photographs are taken of Lenny's impersonation of Casimiro—this time, wearing a makeshift arm sling—collecting the same package from Jimmy that he picked up from the bank before. Jimmy and Kim smear the solution they obtained from Caldera on the photos, and Jimmy hands them off to Genidowski, Howard's P.I. who is revealed to be in on the plot. At HHM, Howard is whisked away from the conference room as he prepares for the mediation by Julie; he goes to his office to meet Genidowski, who shows him the new photos but does not recognize Casimiro. After meeting with Cliff and Irene Landry, Howard starts to feel hot as a consequence of Caldera's solution; when the real Casimiro shows up in the conference room, Howard puts the pieces together. His pupils dilated, Howard lashes out at Casimiro to the horror of the other parties in the room. Flustered, he asks Julie to get the photos from his desk, but it turns out a second set of photos—of Sound Guy collecting the package instead of Lenny—have been swapped in. Meanwhile, Jimmy and Kim are listening in on the mediation from the strip mall office, and have sex as the events at HHM unfold.

An irate Howard storms out of the conference room and runs to his office, while Rich tells Cliff they are prepared to settle for the original amount. Howard explains to Cliff that they must keep pushing for the settlement to increase, even going as far as to suggest going to trial, but Cliff stops him short and insists on settling for the good of all the parties involved. Meanwhile, Lalo emerges in Albuquerque, hiding out in the sewers and spying on Lavanderia Brillante from a nearby storm drain. He records a video for Don Eladio revealing his knowledge about the Superlab and outlining his plans to sneak in, and then calls Hector, but realizes his phone has been tapped, ending the call in a fit of rage. He then calls back, and tells Hector he is going back to "Plan A" as Gus' men swarm the laundry. Mike meets with Gus, who is at a philanthropic function at a local school, telling him to calmly drive back to his house as a trap has been set for Lalo. Howard shows up at Jimmy and Kim's apartment that night, lashing out at both of them over what he correctly assumes was their plan to smear him, but Lalo shows up to see his attorneys. Howard, who was at the wrong place at the wrong time, is shot in the head by Lalo with a suppressed pistol, leaving Jimmy and Kim hysterical. ("Plan and Execution") 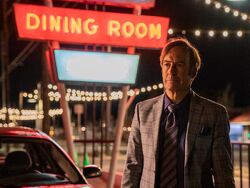 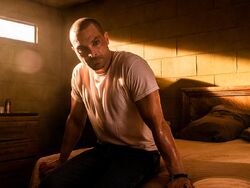 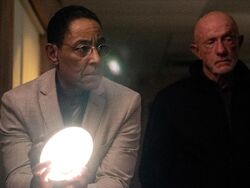 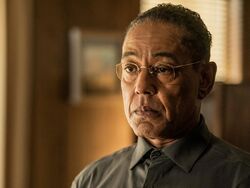 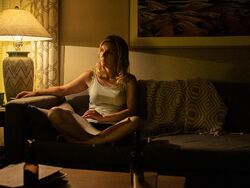 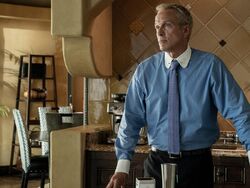 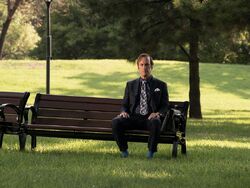 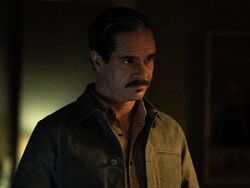 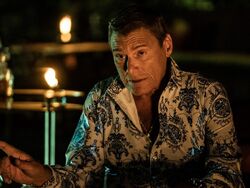 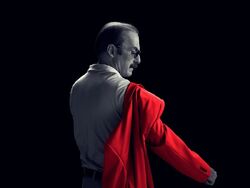 You didn’t see anything. The final season of Better Call Saul premieres April 18 on AMC and AMC+.
Teaser 3