The fifth season of the American television drama series Better Call Saul was announced on July 28, 2018. The series returned on February 23, 2020. It consists of 10 episodes, each running approximately 47 minutes in length.

In a flash-forward, the taxi driver says he knows about Gene's past. A nervous Gene proceeds to call Ed, "the disappearer", but changes his mind, saying he will handle the problem himself. In 2004, Jimmy tells Kim the "Saul Goodman" alias he used for his cell phone business gives him an instant criminal law client base. Nacho reports rumors that some cocaine Gus provides the Salamancas is inferior, which Lalo confirms. Gus tells Lalo and Juan Bolsa that Werner was building a chiller on the chicken farm under Mike's supervision, but fled with stolen cocaine, which Gus replaced with locally-acquired meth. Lalo accepts Gus' cover story but remains suspicious. Saul gives away his remaining cell phones to publicize his criminal law practice. Gus shuts down lab construction because of Lalo's suspicions and Mike sends Werner's crew home. Upset over Gus' lack of compassion for Werner, Mike refuses to accept payment during the downtime. Saul's camera crew helps generate publicity for his practice by faking a confrontation with Deputy District Attorney Oakley. Kim's client refuses a favorable plea bargain. Saul offers to help trick him into accepting. Kim refuses, but after Saul leaves she successfully runs the con herself. ("Magic Man")

Gus wants Nacho to provide inside information about Lalo's intentions. Two drug users who received Saul's 50% off business card go on a multi-day binge. As they attempt to buy more cocaine at the Salamanca drug house, the bags get stuck in the drainpipe. Domingo's attempt to solve the problem causes the drugs to fall out just as police arrive. Nacho gains Lalo's favor by climbing over rooftops to sneak in and retrieve the drug stash before police enter. Mike remains upset over Werner's death and drinks heavily. He babysits Kaylee, who asks questions about her father, causing Mike to lash out angrily. Jimmy attempts to get back into Kim's good graces. She tells Jimmy she appreciated his effort to persuade her client to accept a plea bargain but does not want to lie to succeed. As Saul, Jimmy turns on the charm at the courthouse and makes several favorable plea bargains, then tricks Assistant District Attorney Ericsen into making more after he arranges to be stuck with her in an elevator. Howard invites Jimmy to lunch and the reminder of his past leaves Jimmy unsettled. As Jimmy leaves the courthouse, Nacho suddenly appears and coerces Jimmy into his car. ("50% Off")

Nacho delivers Jimmy to Lalo, who wants him to make sure Domingo is freed from prison without talking. Jimmy as Saul sets up a ploy that draws in DEA agents Hank Schrader and Steven Gomez. Though they suspect a trick, Saul arranges for Domingo to go free in exchange for becoming Hank's confidential informant and revealing the locations of Gus' dead drops. Jimmy discovers that Lalo plans to use him more in the future. Nacho tries to have someone purchase his father's upholstery shop so his father can retire safely away from the drug world, but his father sees through the ruse. Nacho reveals Lalo's plan for Domingo to Fring, and Gus decides not to interfere because doing so would reveal that he has a mole in the Salamanca organization. Mike continues wallowing over Werner's death. Kim is pulled from a day of pro bono criminal defense work to deal with a stubborn homeowner who refuses to leave his land to make way for a Mesa Verde call center. Initially demanding he accept the court judgment, she returns with a sincere offer to help him move, but the homeowner accuses her of only pretending to help and refuses. ("The Guy For This")

Jimmy meets with Howard over lunch, where Howard offers Jimmy a position at HHM. Jimmy is unnerved by the offer and later uses three bowling balls to damage Howard's expensive car, which sports a vanity plate reading "NAMAST3". Kim tries to convince Mesa Verde to use an alternate development plan and leave Mr. Acker's home standing, but Kevin insists on evicting him. Kim decides to bring in Jimmy as Saul, who represents Acker in a suit against the bank. Gus works with Victor and Diego to ensure that the DEA finds the three dead drops Domingo told them about after his arrest. Stacey tells Mike she does not yet feel comfortable having him babysit Kaylee. That night Mike is beaten up and stabbed by the local gang he previously fought with and wakes in an unknown pueblo. ("Namaste")

Mike finds himself on a ranch in Mexico which has ties to Gus, including a fountain dedicated to Max. Dr. Barry Goodman treats him and recommends he stay and heal. Gus later arrives and asks for Mike's help in Gus' war against the Salamancas. Mike refuses to engage in killing simply to further Gus' aims, but Gus says he wants Mike because Mike understands Gus' need for revenge. Jimmy as Saul creates delays in Mesa Verde's eviction of Acker. Kim tries to recuse herself by claiming a conflict of interest, but Kevin insists she remain and refuses any compromises. Howard asks Jimmy to accept his offer to join HHM, and Jimmy claims he is still considering it. Jimmy suggests there are no options left for Acker but to find "dirt" on Kevin and tries to persuade Kim to move on, but she decides to proceed. Jimmy hires Sobchak, who thinks his search of Kevin's home revealed nothing damaging, but Kim’s knowing smile as she looks through Sobchak's photos indicates she notices something useful. Rich suggests that Kim should disengage from Mesa Verde's business, correctly deducing her heart is not in it, but she angrily refuses. ("Dedicado a Max")

Kim tells Jimmy she does not want to follow through on blackmailing Kevin and wants to reach a settlement between Mesa Verde and Everett Acker. Jimmy agrees, but at the meeting to finalize the settlement, he stuns everyone by asking for $4 million. Kim's insight into Sobchak's photos is that Mesa Verde's logo was inspired by a photograph the bank never obtained permission to use. Jimmy pressures Kevin by threatening an injunction against displaying the logo and threatening to run TV ads seeking plaintiffs for class action suits against the bank which negatively depict Kevin's father. Kevin meets privately with Jimmy and accepts a deal to pay Acker and the photographer. Kim angrily confronts Jimmy, upset that he made her the "sucker" for his con. However, she suggests they get married. Gus, Victor, and Mike meet with Nacho, who reports Lalo's plan to reveal the locations of Gus's street dealers to the DEA. Gus directs Victor to give up low-level employees while ensuring nothing leads back to Gus. Mike secretly points the police to Lalo's involvement in the murder of Fred, the money wire clerk, and they converge on Lalo while he is driving. ("Wexler v. Goodman")

Jimmy and Kim get married, applying spousal privilege to their conversations. Lalo is charged with murder under an alias and directs Saul to obtain bail. Kim and Rich apologize for the outcome of Acker's case. Kevin indicates he will let them know later whether he will retain them. Kim and Rich return, and Kim reminds Kevin he ignored their advice. She says that whether he retains them or hires new counsel, she hopes he will be willing to listen, and Kevin indicates his approval. Mike tells Stacey he is over the problem that caused his recent anger. Nacho tells Mike that Lalo wants Nacho to burn down one of Gus' restaurants. Gus and other subsidiary owners provide updates to Peter, Madrigal's CEO. Gus briefs Peter and Lydia on the meth lab's status. Nacho and Gus destroy a Los Pollos Hermanos to preserve Nacho's role as Gus' mole. Saul uses Mike's information to accuse police of fabricating evidence against Lalo. Bail is set at $7 million, which Lalo says he can pay. Howard confronts Jimmy and rescinds his job offer. Jimmy blames Howard for Chuck's death and says that as Saul he has grown too big for the constraints of HHM. ("JMM")

The Cousins pick up Lalo's bail money at a cartel site in Mexico. An informant makes a telephone call to report their presence. Lalo directs Jimmy to a remote pickup site and pays him $100,000 to transport the cash. Kim says she does not want him to go because he is a lawyer, not a "bagman" for drug dealers, but he says it will be an easy job. The Cousins deliver two bags of cash to Jimmy, then depart. As Jimmy starts his return trip, he is cut off by several gunmen. They take the money and prepare to kill him but are attacked by an unseen sniper. All but one are killed and the survivor escapes. The shooter is Mike, who drives off with Jimmy and the cash. Jimmy's car breaks down, so they push it over the edge of the road, then walk cross-country to avoid the gunman. They camp overnight, then continue their trek. When Jimmy fails to return, Kim asks Lalo for his location, but Lalo refuses. The gunman continues searching, so Jimmy acts as a decoy and draws him in. Mike shoots the gunman, whose vehicle flips and is destroyed. Mike and Jimmy resume walking. ("Bagman")

Jimmy and Mike make their way to a truck stop where Tyrus and Victor pick them up. Jimmy posts Lalo's bail and tells Lalo he was alone and walked after his car broke down. Lalo plans to return to Mexico. Gus realizes the men who ambushed Jimmy were hired by Juan Bolsa to protect Gus's business. Jimmy lies to Kim about what happened, but Kim realizes the truth after she sees the bullet hole in his coffee mug. Kim quits Schweikart & Cokely to focus on pro bono clients. Mike tells Jimmy his post-traumatic stress will pass with time. Lalo discovers Jimmy's car and returns to Albuquerque instead of waiting for The Cousins to bring him to Mexico. Mike calls to warn Jimmy just before Lalo arrives at Kim's apartment. As Mike trains his sniper rifle on Lalo from a nearby roof, Lalo has Jimmy repeat the story of his desert walk, then asks about the bullet holes in Jimmy's car. Kim tells Lalo the car was probably destroyed by passersby and berates him for not trusting Jimmy. Lalo appears satisfied with Kim's argument and departs. He tells Nacho to head for Mexico, but not the original pickup site. ("Bad Choice Road")

After Lalo leaves, Jimmy tells Kim the truth about his desert trek with Mike. Kim and Jimmy hide at a downtown hotel. Mike tells Gus that Lalo and Nacho went to Lalo's home in Chihuahua. Gus suggests Nacho can help the assassins he is sending. Kim accepts 20 pending felonies from the public defender pro bono. Nacho receives a call telling him to open Lalo's back gate at 3 am. Kim tells Howard she quit Schweikart & Cokely. Howard warns Kim about Jimmy's recent harassment and suggests Kim should stop following his lead. Kim says she is insulted by the notion that she cannot decide for herself. Mike tells Jimmy that Lalo will be killed, and Jimmy later informs Kim. They discuss forcing a Sandpiper case resolution by sabotaging Howard, which would enable Jimmy to receive his seven-figure share of the settlement sooner. Lalo introduces Nacho to Don Eladio, who gives his blessing to Nacho's plans for the Salamanca drug business. Nacho opens Lalo's gate and runs away as the assassins attack Lalo. Lalo kills all but one of the assassins. He instructs the survivor to call the middleman who arranged for the murder and report that Lalo had been assassinated. ("Something Unforgivable") 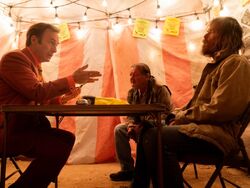 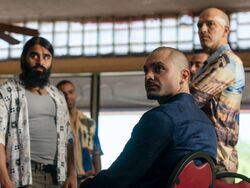 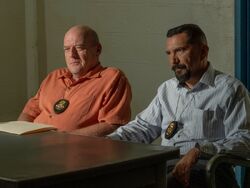 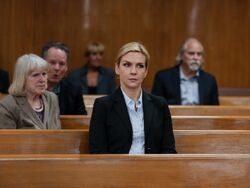 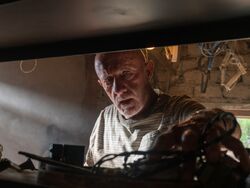 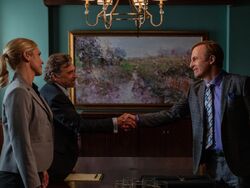 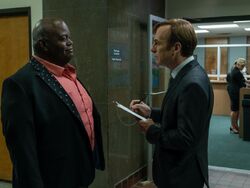 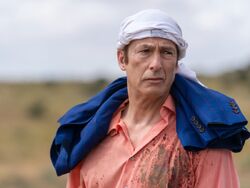 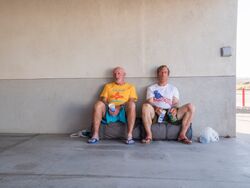 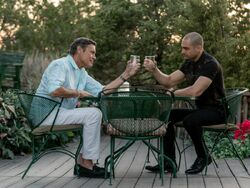