The fifth and final season of the American television drama series Breaking Bad premiered on July 15, 2012. It consists of 16 episodes, each running approximately 47 minutes in length except for the final two which run at 53 minutes respectively. AMC broadcast the first part of the fifth season on Sundays at 10:00 pm ET in the United States, and the second part on Sundays at 9:00 pm. The season is split into two parts, each containing eight episodes. The second half of the season made its debut on August 11, 2013.

One year into the future, Walter White sits alone at a restaurant with his head full of hair and beard grown, he meets with Lawson, his former gun dealer, who gives him a key to a car in exchange of some money. Walt takes a pill and leaves the restaurant, approaching the car and revealing that he just bought a M60 machine gun that's hidden in the car's trunk.

Back to the present, Walt returns home after finally killing Gustavo Fring, he disposes of anything linking him to his successful plot against Gus and then hides the ricin he stole from Jesse Pinkman inside his bedroom, but the laptop containing security footage of Walt is held by the police. Walt calls Jesse and Mike Ehrmantraut to setup a mission to help him destroy the laptop using an industrial electromagnet, but in the process of doing so, the police end up discovering a secret bank account held by Gus that was used to pay his employees. Back home, Walt tries to forgive Skyler White, but the damage has already been done: She's afraid of him. ("Live Free or Die")

Because Skyler used the money Walt earned from Gus' operation to pay off Ted Beneke's IRS debt, Walt believes he has no choice but to start cooking meth again to earn back the money he lost. Walt and Jesse try to convince Mike to join them, but he refuses, stating that Walt is a "time-bomb." Meanwhile, the police discovered that a Madrigal Electromotive GmbH executive, Peter Schuler, was working with Gus in the meth business and was one of the many people being paid by the discovered bank account. Peter commits suicide before the German police are able to reach him.

Worried about this situation, Lydia Rodarte-Quayle, another one of Gus' contact working for Madrigal, tries to contact Mike. She offers to pay him to eliminate the eleven men from the bank account before the police reach them too, but Mike refuses. Lydia then tries to get Mike killed, but fails. Mike decides to use Lydia to help Walt and Jesse in their newly founded Drug Empire. ("Madrigal")

Walt, Jesse and Mike begin a three-way partnership to distribute meth again, while not fully trusting Lydia. Their plans for meth manufacturing are almost not succesful because Saul Goodman cannot locate satisfactory sites, save for one — a pest control company known as Vamonos Pest. Walt and Jesse use the business's fumigation tents on random houses as a mobile laboratory: after the tents are positioned on a house, Jesse and Walt use a mobile meth lab inside the house to produce their product. Skyler realizes that Walter is not exactly free from his meth-making past and begins to fear for her and her children's lives because of the danger involved. Meanwhile, Walt is worried that Jesse forming a new family with Andrea Cantillo will intervene in their new operation, so he manipulates Jesse into breaking up with her. Walt and Mike get into a heated argument when Walt finds out that Mike is planning to use nearly half of their money from distribution to pay off the nine employees from the bank account that are now all in prison. ("Hazard Pay")

Hank Schrader is promoted to become the new ASAC for the DEA in Albuquerque for his work in discovering Gus' drug empire. He decides to start a new investigation on the nine employees imprisoned, knowing that there are still more people connected to Gus. The Schraders later reunite with the Whites for Walt's birthday party, where Skyler tries to commit suicide by walking into the pool. After being saved, she asks Marie Schrader to take care of her children. After the Schrader's leave, Skyler reveals to Walter that, with no other options, she is just patiently waiting for his cancer to come back.

Meanwhile, the methylamine flow is disrupted because Lydia found a GPS tracker stuck to the bottom of one of the barrels, forcing Walter, Jesse, and Mike to think of another option to keep the meth production. Walt decides that the methylamine will keep flowing no matter what: They are just beginning. ("Fifty-One")

Mike kidnaps Lydia, planning to kill her if she doesn't reveal that the GPS in the barrel was her plan to be set free from the operation, but they end up discovering that she was not lying, the DEA planted the tracker. Lydia offers Walt another option to obtain methylamine: rob a train carrying a large shipment. The heist is nearly compromised when a child spots them, but he is shot by a new hire for the heist, Todd Alquist. ("Dead Freight")

As the DEA begins to track Mike, and with the recent death of the child, both Jesse and Mike design a permanent exit for themselves from the business. They plan to sell their methylamine for $5 million each to Declan, a major regional meth producer and distributor. Walt derails Jesse and Mike's scheme when he refuses to sell his share of the methylamine, forcing Mike to lock up Walt until the deal is done. Walt is able to escape and takes the methylamine with him, he later gives Mike and Jesse another option to earn money with the production like he wants and at the same time Mike and Jesse can leave the business, "everybody wins." ("Buyout")

Walt uses his Heisenberg persona's infamy to cut a distribution deal with Declan and negotiate the $5 million severance for Mike. Jesse is determined to leave the business, irrespective of his financial cut, so Walter enlists Todd as his assistant cook. After the DEA closes in on Mike, he decides to leave for good.

Walt meets with Mike in the desert so they can set things up before Mike departs New Mexico. Walt says that there is one last thing that he requires from Mike: the name of Gus' nine employees that might talk in prison, but Mike refuses to give them, blaming Walt for all the bad things that happened until now. Walter impulsively shoots Mike dead after a confrontation, later regretting the action when he remembers that Lydia has the names. ("Say My Name")

After getting rid of Mike's body, Walt manages to get the names from Lydia and arranges for the men to be killed by associates of Todd's uncle, Jack Welker, leader of a white supremacist gang.

In exchange for her safety, Lydia arranges for Walt's product to be shipped to the Czech Republic using Madrigal's more obscure branches. Over the next few months, this nets Walt an extraordinary amount of money - so much that, after some pleading from Skyler, he finally decides to retire, dropping off $5 million he owed to Jesse at his door. Months later, the White family is happily living under one roof again.

All seems to be going well until one day during a barbecue with the Whites and the Schraders, Hank excuses himself to the toilet and while searching for something to keep himself distracted, he discovers a book of Walt Whitman poetry dedicated to "WW" by "GB". Hank, remembering a conversation with Walt regarding the initials from his earlier investigation and surmising that "GB" is Gale Boetticher, clearly sees that Walter is Heisenberg. ("Gliding Over All") 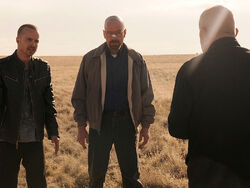 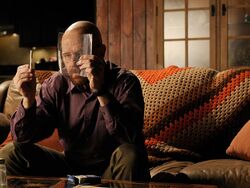 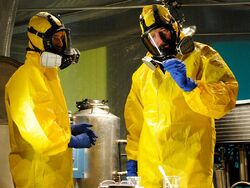 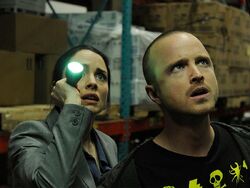 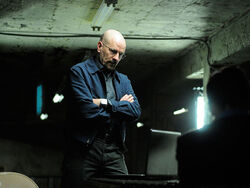 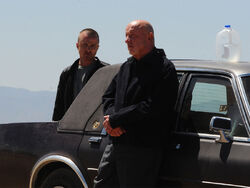 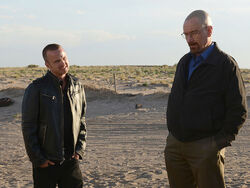 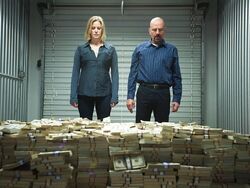 * = Giancarlo Esposito is strangely nominated 1 year after the end of season 4 and while he is no longer part of the cast of the series. 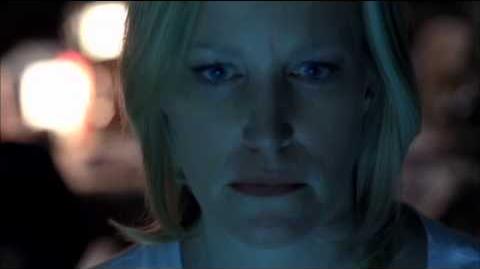 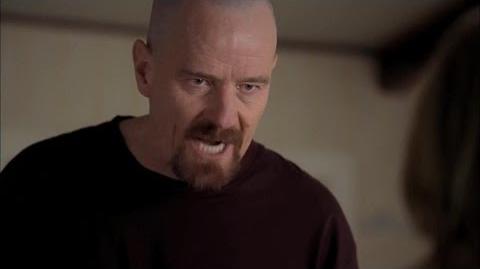 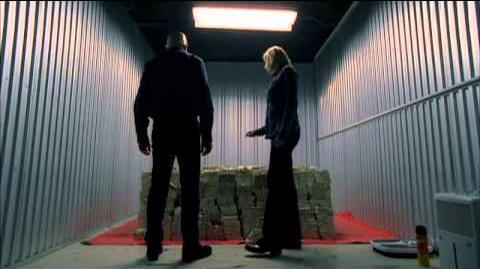 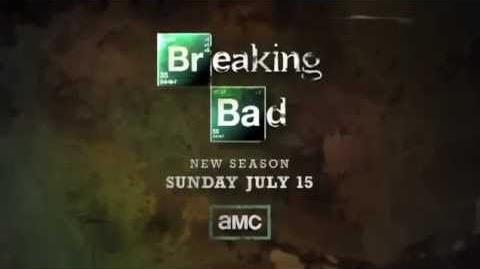 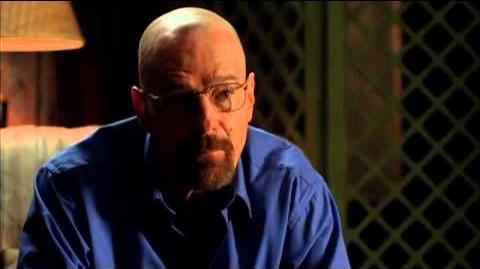 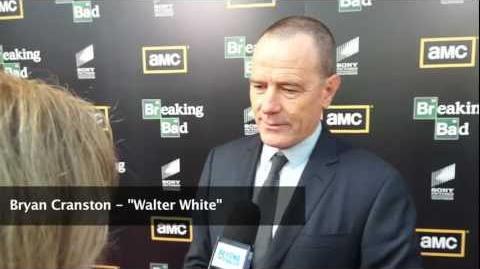 The first part of the fifth season of Breaking Bad was released on DVD as well as Bluray+Ultraviolet Combo on June 4th, 2013.

Retrieved from "https://breakingbad.fandom.com/wiki/Season_5A?oldid=92109"
Community content is available under CC-BY-SA unless otherwise noted.