The Pink Teddy bear is an object from Wayfarer 515, the plane which crashed onto another in the air near Walter White's house. Seconds after the crash, the bear landed in Walter's pool. As a result of the plane explosion, the pink bear lost an eye (which bobbed at the surface of Walter White's pool while the bear itself sank and was later fished out and put in an evidence bag by NTSB investigators) and sustained a burn to its left side. It likely belonged to a child onboard Wayfarer 515.

The bear itself is considered very symbolic in Breaking Bad. It has been said to symbolize the consequences of Walt's actions, or his loss of innocence. It also seems to foreshadow Gus Fring's death two seasons later; an explosion would leave him with burns almost identical to that of the bear.

The pink teddy bear is a recurring motif in Breaking Bad, appearing in several episodes of the show's second season. Its missing eyeball appears later in the series, as Walt kept it in his possession. The meaning and symbolism of both the bear and the eyeball are open to debate and interpretation.

The teddy bear first appears at the end of the music video for "Fallacies" by Jesse's band, "TwaüghtHammër", which was released as a webisode in February 2009 leading to the second season. The teddy bear can also be spotted on the mural on Jane's bedroom wall during the final episode of the second season, further connecting the crash to Jane. In "Bit By A Dead Bee", although not likely the same bear that later appeared in the pool, the Hi-Lo Market (where Walt is naked after his supposed "fugue" state) appears to be selling the same toy. The image is blurry but the color scheme is unmistakeable. In "Rabid Dog" the pink teddy bear can be seen stuck in a tree while Jesse is getting into Hank's car. It is also visible at the beginning of Season 2, episode 12 laying behind the fence at the hotel just before Walter speeds in to make his 1.2 million dollar drug deal. 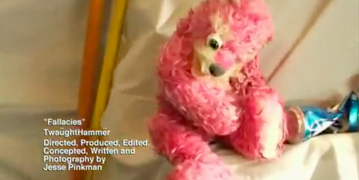 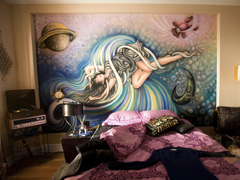 The pink teddy bear can be seen painted on the mural above Jane's bed. 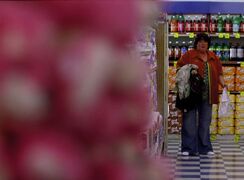 The bear on sale at the Hi-Lo Market. 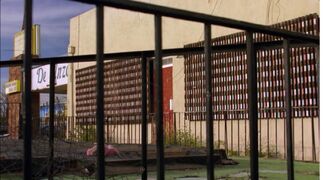 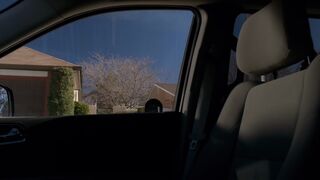 In a tree in the background of "Rabid Dog" 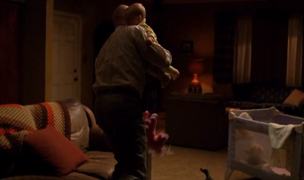 In "Half Measures", Walt takes what appears to be a pink teddy bear before putting it in the cradle of Holly.
Add a photo to this gallery

The pink teddy bear is seen in flashforwards during four episodes, the titles of which, when put together in order, form the sentence "Seven Thirty-Seven Down Over ABQ".The flashforwards are shot in black and white, with the sole exception of the pink teddy bear, which is an homage to the film Schindler's List, in which the color red is used to distinguish a little girl in a coat.

At the end of the season, Walter indirectly helps cause the midair collision of two airplanes; the pink teddy bear is then revealed to have fallen out of one of the planes and into the White family's pool. Vince Gilligan called the plane accident an attempt to visualize "all the terrible grief that Walt has wrought upon his loved ones" and "the judgment of God."

Television critic Myles McNutt has called it "a symbol of the damage [Walter] feels responsible for," and The AV Club commented that "the pink teddy bear continues to accuse." Fans and critics have compared the appearance of the teddy bear's face to the image of Gustavo Fring's face in the fourth season finale. Gus is also visibly missing his eye, just like the teddy bear. When asked about the symbolism of the teddy bear eyeball, creator Vince Gilligan stated:

"The teddy bear eyeball that Walt found in his swimming pool is symbolic. It's very, very symbolic. However, I'm not sure I can tell you with 100% certainty of what the symbolism is, what it represents...On the face of it, when we were coming up with that eye as an image, it probably, represented some form of the eye of the universe, the eye of god, the eye of morality, I suppose judging Walter White...And so symbolism like the eyeball, I'm not sure what it means to me completely but I'm always interested in hearing what it means to viewers of the show. I guess if you're going to hold my feet to the fire, what it means to me is the eye of God on Walt. If not necessarily judging him, nonetheless watching him, keeping tabs on him. And then the question: If that is what the symbolism stands for, then why does Walt keep that eye? Why does he keep it in his drawer versus discarding it?"
―Vince Gilligan

In the Season 2 DVD extra "Inside Breaking Bad: The Props" the prop master comments:

"With Vince you just don't know what's going to be next. So you can't assume like "oh we'll just burn the teddy bear" cause there might be a reason that it's burned this way. He might have something planned on down the road two seasons from now."
―Mark Hansen (Propmaster)

It is then revealed that exactly 2 seasons later (Season 4 Episode 13 "Face-off") that Gus is blown up and burned with the exact same burn damage to his body as the teddy bear, revealing the teddy bear to have been a foreshadow.

Retrieved from "https://breakingbad.fandom.com/wiki/Pink_Teddy_Bear?oldid=109780"
Community content is available under CC-BY-SA unless otherwise noted.