Start a Wiki
watch 00:55
'Breaking Bad' Profile: Juan Bolsa
Do you like this video?

Juan Bolsa was a high-ranking member of the cartel which the Salamanca family belongs to. It is Bolsa who is the one that orders Tortuga's execution by Marco and Leonel Salamanca, and later places his head on a explosive rigged tortoise for the DEA to find.

He is also the cartel's liaison with Gustavo Fring, and is the one who arranges a meeting between Gus and the Salamanca Family (Marco, Leonel, and Hector) on the matter of Walter White.

After secretly sanctioning a hit on DEA Agent Hank Schrader in order to turn the American government against the cartel, Fring would ultimately get Bolsa murdered by Federales to cover his own role in the failed assassination.

Bolsa was one of the founding members of the Juárez cartel and a close ally to Don Eladio and Hector Salamanca. His brother is a police chief.

Bolsa was present the day Gus and his partner, Max Arciniega, made an attempt to get in contact with the Juárez Cartel by selling their drugs to cartel members without Don Eladio's consent. The two were called to meet Bolsa, Tio and Don Eladio. Gus and Max try to convince them that their product is nothing like anything they ever sold, it is chemically superior. Juan Bolsa and Tio make fun of them, and Don Eladio orders Tio to kill Max as punishment for Gus' disrespectful actions.

Bolsa and Tio hold Gus down, forcing him to look in the eyes of his deceased partner, while Don Eladio taunted Gus, telling him to stay away from the Cartel ("Hermanos").

Hector and Gus meet at a remote location, flanked by their respective henchmen. Over a speaker phone, Hector communicates with Juan Bolsa, who tells him that Don Eladio is satisfied with the new "consolidated transportation method" of shipping drugs over the border, and wants the practice to continue using Gus's Los Pollos distribution network exclusively. Hector angrily smashes the phone, wanting to have his own distribution method instead of Gustavo's. Hector's heart problems act up, leading him to open the vial containing Nacho's spiked pills. However, the pills have no apparent effect, and Hector curses Eladio, Bolsa, and Gus before leaving. ("Fall")

A cartel meeting occurs at Hector's warehouse in Albuquerque with Gus and Juan Bolsa, unbeknownst to them Nacho Varga is planning on killing Hector on the spot. Bolsa informs Hector that Don Eladio is reinforcing his orders regarding Gus' operations. Hector grows enraged the Don's orders and starts screaming at Bolsa and Gus that the Salamancas have worked hard for the cartel, they lost blood for the cartel, they invested money in the cartel and even then they are treated like dogs. Hector starts having another attack in his infuriated state, he suffers great pain when he tries to take his medication - Nacho's spiked pills finally kick in. Hector suffers an apparent heart attack and collapses to the floor, Gus rushes in and performs CPR as Juan Bolsa flees. Hector survives and is taken to a hospital by ambulance while Gus rightly suspects Nacho's involvement. ("Lantern")

Immediately after Hector is driven away in an ambulance, Nacho is left standing in the lot of the upholstery shop with Gus. As Gus makes a call on his cell phone to Juan Bolsa, Nacho sees a broken sewer grate on the ground and moves to covertly drop his vial of tainted pills into it. However, he has to abort when Gus ends the call and tells him that Bolsa wants a word. At the Los Pollos Hermanos chicken farm, Bolsa tells Nacho and Arturo that the Salamancas will keep their territory despite Hector's apparent stroke and instructs the pair to continue working as before. After Nacho and Arturo are dismissed, Bolsa confers with Gus, who believes that someone will make a move on the Salamancas that will trigger a drug war and draw in the DEA ("Smoke").

Following the staged attack on Nacho, Gus gets a call from Juan Bolsa informing him of the attack on Arturo and Nacho. Noting the similarities to two prior hits on Hector's trucks (both of which were actually Mike's doing), Gus and Bolsa agree to run dummy loads over the border until the culprits are identified. When Gus tells him that no more than a week's supply of product is left, Bolsa orders him to go ignore edicts from Don Eladio and find a supplier north of the border ("Something Beautiful").

Lalo drives to the chicken farm to have a sit-down with Gus and Juan Bolsa over altered cocaine that he discovered and Werner Ziegler. Gus falsely admits that he secretly replaced some of the cartel's cocaine with methamphetamine after Werner stumbled upon Gus's drug business and stole the product. When Lalo demands to know what "construction project" Werner was working on, Gus shows him and Bolsa a massive structure being built by Werner's men for an industrial chiller. Lalo is introduced to Mike, who is supervising the crew. With Lalo seemingly mollified, Bolsa tells Gus that Eladio is not pleased with the breach and warns him not to keep secrets from the cartel again.

Outside the chicken farm, Bolsa confronts Lalo for spying on Gus's operation and murdering the TravelWire employee. Lalo replies that he is simply looking after the interests of his uncle Hector, who believes that Gus is holding a grudge against the cartel after Hector executed his "boyfriend." Bolsa insists that Gus is solely concerned with business, to which Lalo expresses skepticism due to an unspecified past incident in Santiago. Bolsa says that Gus will never be "one of us" but that he's a good earner who keeps Eladio happy, which is all that matters. Lalo tells Bolsa that he has no further issues with Gus ("Magic Man").

After Jimmy McGill is ambushed in the desert while bringing $7 million to grant Lalo bail and after Mike discovers the tattoo Tiburón and the gang he was apart of had, Gus realizes that Juan Bolsa hired them. Gus calls Bolsa who is pleased that Gus can get back to business as usual, noting the recent string of "bad luck" he has suffered. Gus explains to Mike Ehrmantraut that Bolsa had hired the gang to protect his own interests by protecting Gus' interests. ("Bad Choice Road")

Bolsa is reporting to Don Eladio when Lalo brings Nacho Varga to meet the cartel leader. Though he stands silently by, Bolsa doesn't seem particularly pleased by the situation. ("Something Unforgivable")

In a flashback following his secret meeting with the DEA, Tortuga is shown in a bar lecturing laborers with his stories about the haves and have nots. Bolsa comes in looking for Tortuga saying that he had a birthday present for him in the back. Tortuga follows Juan and is told that the tortoise on the ground is his gift. Tortuga is enthusiastic about his present until Bolsa signs it with the words "Hola DEA" on the shell, making it clear that he knows Tortuga is a traitor collaborating with the DEA. At this instant, Marco and Leonel come in and restrain Tortuga and brutally murder him by chopping his head off with a machete due to his betrayal to the Cartel. His head is then placed on the animal along with a mercury switch and C4 which was later used to ambush the DEA and Mexican police, killing at least 1 officer and maiming at least 4 others.

Juan Bolsa arranges a meeting between himself, Tio Salamanca, The Cousins and Gus. He tells Gus he will urge the Salamanca family to be patient, but advises that Gus risks losing the favor of the cartel if he does not finish his business with Walter quickly and that he cannot guarantee the Cousins will listen to reason. He has forbidden the Cousins to kill Hank Schrader, as the DEA is "off limits" ("I.F.T.").

After the ambush on Hank leaves one Cousin dead and another in the hospital, Bolsa is confined to his home as Mexican federales are watching him closely due to pressure from the American government. He suspects Gus of being responsible for the Cousins making a move on Hank, but cannot see the benefit to Gus as the pressure is delaying the drug shipments across the border. He promises that he will get the surviving Cousin, Leonel, the best lawyer possible and will get the truth of what happened.

Once Leonel suffers a cardiac arrest and dies due to being poisoned by Mike Ehrmantraut on orders from Gus, Bolsa calls and warns Gus that he is convinced he was involved in that death, promising he will survive the government's attention and pay Gus a visit afterwards. However, as he is speaking with Gus, gunshots are heard. Seeing his bodyguards getting killed, he attempts to make his escape. Opening his door, he is gunned down by an unseen assailant as Gus smiles on the other end of the line ("I See You").

Bolsa appears in a flashback showing Gustavo and Max's first meeting with Don Eladio, Hector and himself to form a partnership. The three cartel leaders mock Gustavo and Max for their claims that meth will net them millions and Bolsa helps restrain Gus after Max is murdered by Hector for his disrespectful actions towards the cartel ("Hermanos").

Bolsa's death would later be avenged by his ally Hector who, with the aid of Walter White, suicide-bombs Gus, killing him.

Gus: "Do I not run my own territory?"
Juan: "Of course you do. And I will advise them to be patient. But I recommend you finish your business with the man quickly. Or you risk losing the good graces of the cartel. That would not be wise. And those boys inside, I cannot guarantee that they will listen. They are...not like you and I."
―Juan Bolsa during his meeting with Gustavo Fring.[src]

Gustavo: "Juan, you sound like you're under a lot of stress. Maybe you should call me back when you're seeing things more clearly."
Juan Bolsa: "I see things clear enough. One DEA gets shot, all of Washington starts barking. The DF suddenly has to put on a big show and I wind up with federales in my rose bushes. And just for a while, appearances, politics... Are you still there, Gustavo?"
Gustavo: "Yes, I'm here."
Juan Bolsa: "I'll weather this. I always do. My brother is a police chief. I got connections. They'll get me through. And when I get proof and the others find out what you've done, maybe we come pay you a visit. Maybe—"
―Gus and Juan's phone conversation, shortly before Juan is gunned down on sight. Gus, hearing this on the phone, smiles, breaks apart the phone and throws it away.[src] 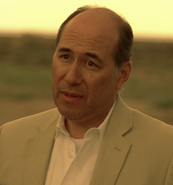 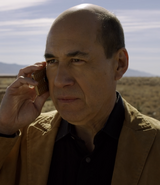 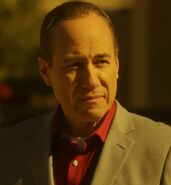 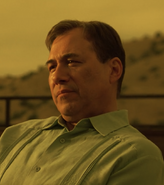 Juan Bolsa's mugshot.
Add a photo to this gallery
Retrieved from "https://breakingbad.fandom.com/wiki/Juan_Bolsa?oldid=107186"
Community content is available under CC-BY-SA unless otherwise noted.