J. P. Wynne High School is a public high school located in Albuquerque, New Mexico. Walter White was formerly employed as a chemistry teacher at the school. It is also the school where Walter White Jr. and Jesse Pinkman attended as students.

After the Wayfarer 515 disaster, the school held an assembly to discuss the tragedy. Several students and faculty spoke about their feelings ("No Más").

Walt took a lot of time off from teaching while battling lung cancer and expanding his meth production. Walt's behavior becomes increasingly erratic and when talking with the assistant principal, Carmen Molina, he attempts to kiss her, which results in him being placed on "indefinite leave" ("Green Light").

Walt's lessons took place in the chemistry laboratory of the school. According to Walter White Jr., Walt was nicknamed "Mr. Wallabee" for the shoes he wears. When he was in class, he kept his second cell phone above the suspended ceiling, which once awkwardly started vibrating and beeping in the middle of a class. 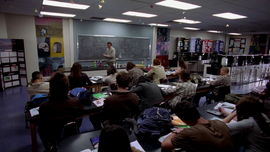 Walt having a class ("Pilot"). 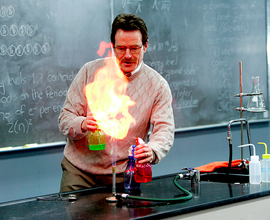 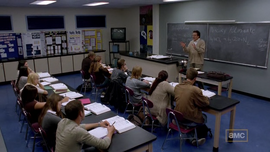 Walt delivering a lecture in his classroom ("Crazy Handful of Nothin'")

The chemical storage room is located in the SciMatics building. Walt stole some of the school's chemistry lab equipment to create a meth lab in the RV ("Pilot"). Near a cook site, he and Jesse accidentally left behind a respirator labelled with the school's name, leading Hank Schrader and the DEA to investigate the school's lab inventory ("Crazy Handful of Nothin'"). This makes Walt nervous as he's one of the few people in the school with a key to the supply room. Hank confirms that apparently someone stole the proper equipment for a meth lab, but nabs Hugo, a friendly school janitor who happened to have a criminal drug record ("Crazy Handful of Nothin'").

According to Walt, the "missing" apparatus are as follows ("A No-Rough-Stuff-Type Deal"):

Following the Wayfarer 515 plane disaster, which resulted in the deaths of 167 people, J. P. Wynne High School held an assembly led by Principal Carmen Molina in the gymnasium to discuss the incident. Several students spoke, and when it was Walt's turn he became defensive and urged everyone to look on the bright side of the disaster, saying that at least it was no Tenerife ("No Más").