Ira is the former owner and current manager of Vamonos Pest.

Vamonos Pest tents around four houses every week in the Albuquerque area. While the organization is legitimate, the five-man crew of exterminators, which Ira leads, bolster their income by burglarizing the houses they fumigate (or by selling the alarm codes and duplicated keys to other criminals). The Vamonos employees would either sell the information to other thieves or rob the houses themselves after a period of time. Saul Goodman was a lawyer for many of Vamonos' crooks.

In April 2003 Ira is hired by Jimmy, through Caldera, to steal a Hummel figure from Neff Copiers. Jimmy tells Ira that its the easiest $4,000 he'll ever make. However, unknown to Jimmy is that Mr. Neff is staying in the office that night due to a supposed fight with his wife. Ira is forced to hide and calls Jimmy to help get him out. Jimmy comes to the rescue by setting off Mr. Neff's car alarm and allowing Ira to escape. ("Something Beautiful")

Ira later gave Jimmy his cut of the sale, which was a lot more than Jimmy expected. Ira explains they got into a bidding war over it and Jimmy thanks Ira for his honesty while Ira thanks give for not leaving him behind. Ira asks about another hummel job but Jimmy doesn’t have any right now but promises he will in the future. Before they part ways Ira tells Jimmy the best way to reach him is to call The Vet, since Ira uses a new phone for every job, citing they never know who is listening. This gives Jimmy the idea to sell drop phones to criminals from his new job at CC Mobile. ("Talk")

In August 2009, Ira sold Vamonos to Mike, Walter, and Jesse to be used as a front for their newly founded methamphetamine organization. The Vamonos crew was strictly instructed to not speak to Walt nor Jesse and were forbidden from stealing from any of the houses that Walt and Jesse were working in. ("Hazard Pay") 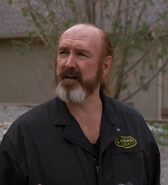 Retrieved from "https://breakingbad.fandom.com/wiki/Ira?oldid=105150"
Community content is available under CC-BY-SA unless otherwise noted.