Holly White is the infant daughter of Walter and Skyler White. Walter White Jr. is her older brother.

Skyler is pregnant with her throughout the first two seasons of the show. That pregnancy was unintended.

While pregnant with Holly, Skyler smokes, much to Walt's displeasure when he finds out. ("Down") ("Breakage") They originally plan to deliver her via Caesarean section, however Skyler unexpectedly goes into labor and gives birth to Holly. Walt is not present during the birth of his daughter because he is preoccupied with drug related business; he blames Jesse Pinkman for making him miss the birth. Ted Beneke, Skyler's boss, is the one who takes her to the hospital when she goes into labor and stays with her until Walt finally arrives. ("Phoenix")

After her birth and while her parents are separated, Holly regularly accompanies her mother. She can be seen at Skyler's lawyer's office ("No Más"), at her mother's workplace ("Caballo Sin Nombre") or many times by car. Her aunt, Marie, also babysits her from time to time ("Más").

While the family is at the hospital at Hank's bedside, Skyler hires a babysitter to keep Holly. ("I See You")

Holly is more discreet about the end of season 3. However, she appears especially in the important scene during which Walter keeps her and Mike visits him to prevent him from the half-measures ("Half Measures").

Holly appears in every episode of the first half of season 4. As in the third season, we see her especially with her mother, especially when Skyler tells a locksmith to force the door of Walt's apartment ("Box Cutter"), when Skyler watches the car wash ("Thirty-Eight Snub") or during a family dinner in the Schrader Residence ("Bullet Points").

From the moment Skyler is working on the car wash, Holly disappears for several episodes. She reappears for the end of the season, especially while the whole family is under witness protection at Hank and Marie while the DEA think that Hank and his family are in danger. ("End Times") ("Face Off")

Holly is seen learning to walk in season 5. Holly and her brother spend three months in the home of Hank and Marie Schrader while their parents work to determine the state of their marriage. Not long after she returns home, a fight between Marie and her mother Skyler over the custody of Holly broke out. ("Buried")

After Skyler attempts to stab Walt, he takes Holly and runs off. Skyler then calls the police on Walt, who send out an amber alert. Later on, however, Holly starts calling for her mama. Walt leaves Holly — along with a note — sitting inside of a truck at a fire station, where she is found by one of the officers and later returned to Skyler. ("Ozymandias")

Walt showing his daughter the cash that he was earned. ("Phoenix").

An older Holly with the family. ("Gliding Over All") 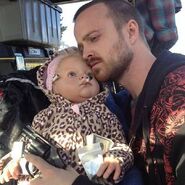 Holly becomin' a Holla with her real homie Jesse Pinkman