The company's logo is a stylized golden bee, seen on many of the barrels in the superlab and at Madrigal's warehouse. Although the company is called "Golden Moth" the character in the logo is 蜂 (fēng), which is Chinese for bee, wasp, or hornet; "moth" is 蛾 (é).

The serial number on those barrels 00892-B can be read as a hexadecimal RGB code, and #00 89 2B is the signature Breaking Bad green color.

Barrels with the Golden Moth logo first appear in "Fly", despite the Superlab appearing earlier in "Off Brand".

Chow was once held hostage by assassins from the Cartel to stop the flow of chemicals to the superlab until they were killed by Mike Ehrmantraut. ("Full Measure")

After the fall of Gus' Drug Empire and Chow's murder, Mike recruited the help of Lydia Rodarte-Quayle, an executive of Madrigal Electromotive, a German shipping conglomerate that had supplied Golden Moth Chemical with methylamine. Ron Forenall was in charge of the Houston warehouse of Madrigal Electromotive until he was taken into custody by the DEA and police. Later, Jesse Pinkman and Lydia went into the warehouse and used a forklift to grab a barrel of methylamine, but discovered that  there was a GPS tracker affixed to the bottom of the barrel ("Fifty-One"). 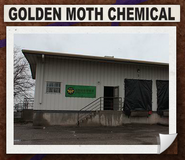