View source
watch 02:58
Episode Recap: Gliding Over All
Do you like this video?
Play Sound

Synopsis: Walt ties up loose ends. Seeing the evidence of his success, he makes a startling and dangerous decision.

2.78 million
"Gliding Over All" is the eighth episode of the fifth season of Breaking Bad and the fifty-fourth episode altogether. It is also the mid-season finale.

Walt, in deep thought, is observing a fly at Vamonos Pest when Todd informs him that he has disposed of Mike's car. The two walk to Walt's car and open the trunk, where Mike's body is being kept. Walt lies to Todd and claims that Mike's death had to be done and the two prepare to dissolve his corpse in acid. The garage door suddenly opens, prompting Todd to close the trunk. Jesse enters, asking if Walt met with Mike, and if Mike got the money and got away. Walt evades directly answering the question, technically answering by saying only that Mike is "gone." Jesse questions what should be done about Mike's men, suggesting a vote. Walt tells Jesse that now that he has quit, he no longer has a vote and that Walt will handle it himself. He quickly ushers Jesse out of the garage with a stern glare. The door descends between them.

Visiting Dennis at Metropolitan Detention Center, Hank rejects a proposed plea deal from and his lawyer, and leaves to look for a better deal from another former associate of Gus. Meanwhile, at The Grove cafe, Lydia defensively refuses to give Walt the names of Mike's men, and the now-incarcerated lawyer who paid their families. She reminds Walt that there's now a tenth name (Mike's lawyer) but states she has not written the names down, and will only divulge them after her safety is assured. She surmises Mike has been eliminated, which Walt confirms. Eager to be of further use to him, Lydia proposes a new business plan to sell Blue Sky in the Czech Republic -- where purity of meth is 60% compared to Walt's 99% -- using her trusted associates on various levels at Madrigal. After negotiating a 30% commission of their joint business, Lydia gives Walt the names. After she leaves, Walt lifts his hat off the table, disclosing hidden beneath that he had brought the ricin capsule to the meeting (implying that he had intended to kill Lydia to tie up another loose end) but decided not to use it after accepting Lydia's new offer.

Walt meets with Todd's uncle Jack and his associates. They debate the logistics of killing ten inmates in a single, two-minute window at three different prisons. The next day, Walt paces around his dining room watching the seconds pass on his new watch. In the prisons, Mike's lawyer Wachsberger and the nine "legacy" members of Gus' Drug Empire are shanked, strangled, or burned alive.

Wachsberger is the first killed; while on the phone with his own lawyer he is repeatedly stabbed with makeshift shanks by three members of Jack's gang. At another facility, Ron Forenall is also stabbed by three men while they are being transported to another part of the building. At Los Lunas, Andrew Holt has his head smashed against a wall and stabbed in the neck by one man. Jack McGann is stabbed to death by two men. William Moniz is stabbed and then thrown off a balcony. Dennis Markowski is trapped in a solitary holding cell during an apparent lockdown, when three men come and pour in flammable fluid before tossing in a burning piece of paper, igniting the room as well as Dennis. Walt received a call exactly two minutes later from Jack telling him "It's done."

Hank is pulled from a photo-shoot with a group of girl's softball players by Steve Gomez and given the news.

Three days later, Hank and Walt share a drink at Hank's house. Hank reminisces about his first job in college as a tree tagger. He wonders if that job was better than his current job, which Hank describes as "chasing monsters."

Walt and Todd resume cooking meth, delivering shipments to Declan's driver and to Lydia, who ships it to the Czech Republic. They perform several cooks in various houses undergoing pest control treatments over a period of three months, while Skyler White continues to launder the drug proceeds and Saul Goodman watches the wires. During a visit to her children at the Schrader residence, Skyler watches as Holly White takes her first assisted steps and Marie makes a comment to Skyler that she and Hank feel they might be "enabling" her family. She suggests to Skyler that it might be time for her and Walt to reunite with the children at their own home, to continue to heal as a family.

Later that night, Skyler takes Walt to a storage unit she has rented, shows him a gigantic pile of cash that she has created out of his drug proceeds, having been unable to launder or count it all, and pleads to have her children back home and her life back as she shows him all that he has accomplished.

Walt goes to the hospital for his routine MRI. After his scan he visits the bathroom where he washes his hands and notices the paper towel dispenser he punched in "4 Days Out." Then he drops by Jesse's home after not being able to reach him by phone. In a tense interchange in which Jesse is distrustful of Walt's intentions, they manage to reminisce about their old RV which Jesse had coined "The Crystal Ship." After a short bout down memory lane, where both almost relax into their old selves, Walt turns to leave. At the door he turns back and tells Jesse, "I left something for you." Jesse hesitantly edges toward two large duffel bags on his porch and to his relief finds that they are full of cash, his owed $5 million's worth. He hauls his haul inside, sits down on the floor and stares at it, his eyes filling with tears of relief, joy and gratitude as he takes his pistol out of his pants, switches the safety back on, then shoves it away from him along the floor, implying he thought Walt was there to kill him and that he would have shot him if he tried anything.

Walt returns home and announces to Skyler, "Okay, I'm out." Skyler realizes she can have her children back in their home. By the weekend, the White family and the Schraders happily gather around the table beside the pool. Holly is being pushed on her red plastic toy car by her brother Walter Jr. as Hank and Walt talk about Hank's Schraderbräu beer. Skyler, seemingly more relaxed, idly chats with Marie about hair styles.

Hank excuses himself to use the bathroom. Sitting down on the toilet in the White's master bathroom, Hank looks around for something to read. After thumbing through a magazine, Hank loses interest and finds a copy of Walt Whitman's Leaves of Grass. As Hank thumbs to the front of the book, he comes to an inscription in a familiar handwriting: "To my other favorite W.W. It's an honour working with you. Fondly, G.B." In an immediate flashback, Hank recalls his discussion of a case with Walt that concerned lab notes by Gale Boetticher ("Bullet Points"), where Hank joked Walt could be 'W.W.' and Walt offered up the 'Walt Whitman' decipher -- and Hank finally comes to the uneasy realization that Walter White is the elusive meth kingpin and mastermind "Heisenberg" that he had been searching for all along.

Skyler: "Take a drive with me. Walt, this is it. This is what you’ve been working for. I rented this place, and I started bringing it here, because I didn’t know what else to do. I gave up counting it. I mean I had to. It was just so much, so fast. I–I tried weighing it. I figured one bill of any denomination weighs a gram. There are 454 grams to a pound, but there’s a variety of denominations, so..."
Walter: "How much is this?"
Skyler: "I have no earthly idea. I truly don’t. I just stack it up, keep it dry, spray it for silverfish. There is more money here than we could spend in ten lifetimes. I certainly can’t launder it, not with a hundred car washes. Walt, I want my kids back. I want my life back. Please tell me–How much is enough? How big does this pile have to be?"
―Sklyer and Walt facing a mountain of banknotes at the storage facility. 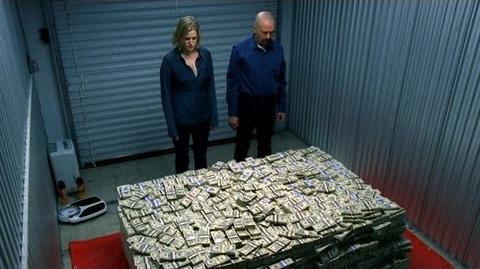 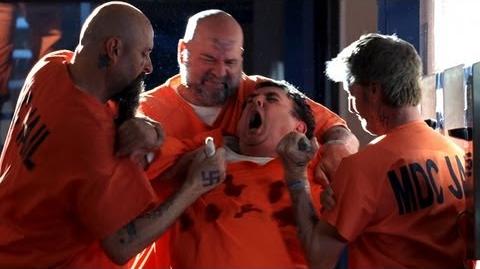