Start a Wiki
watch 01:36
Who is Eladio Vuente?
Do you like this video?

Eladio Vuente was the leader of the Ciudad Juárez Cartel, a Mexican drug cartel that employed Juan Bolsa, Hector Salamanca, and Salamanca's nephews. He first met Gustavo Fring in 1989 and was one of the few to know about Gus' mysterious Chilean background.

Don Eladio would ultimately be killed by Fring as revenge for ordering Maximino Arciniega's murder and to destroy the entire cartel.

Twenty years prior to the events of the series, Don Eladio met with Gustavo Fring and his partner Maximino Arciniega attempted to propose a business deal wherein they would produce methamphetamine for the cartel, which Eladio would then distribute. Eladio graciously complimented them on their chicken recipe and the conversation was civil for a time.

However, Don Eladio was unimpressed by their pitch, and had Max executed by Hector Salamanca for manipulating him into a meeting. However, he only spared Gus's life due to his currently unrevealed past in Chile. As Don Eladio and his men forced Gus to watch as the blood dripped into the pool, Hector warned him to keep his business restricted to chicken. ("Hermanos")

At some time in the ensuing few years, he entered into a partnership with Gus, who served as Don Eladio's chief distributor in the American Southwest.

In a flashback to 1999, Don Eladio is shown to have a cruel taunting sense of humour when dealing with his immediate subordinates and shows bias in favour of Gus when he brings a much better stash of cash than Hector, much to the latter's badly concealed fury. He ultimately decides the cartel will use Gus' vehicles across the border as opposed to Hector. ("Sabrosito")

Lalo Salamanca takes Nacho Varga to meet with Don Eladio at his home in Mexico, giving the cartel leader a car as a gift. Don Eladio is surprised to learn that Nacho is a friend of Tuco, humorously asking if Nacho is alright in the head. Don Eladio and Nacho discuss Nacho's plans for the cartel's business in Albuquerque and Nacho admits that he wants to be his own boss and not to have to look over his shoulder all the time. Though Don Eladio points out that he's in the wrong business for that, he respects and likes Nacho and his plans. ("Something Unforgivable")

Don Eladio's cartel and Gus Fring's meth network suddenly clashed. The situation escalated as Don Eladio ordered his men to hijack several of Gus's Los Pollos Hermanos trucks, in which bags of meth were stored in certain fry batter tubs. ("Bullet Points") It isn't made clear whether or not Eladio knows of Gus' role in the elimination of Tuco's cousins.

Finally, Eladio sent Gaff to meet with Gus on the Los Pollos Hermanos Factory Farm with an ultimatum: Give up the formula of the product Gus is selling, the pure "Blue Sky" meth. Gus at first rejected, but Gaff started to harass his business, including using a sniper to kill one of Gus's henchman and ultimately forcing him to accept the offer. ("Bug")

Gus, Mike Ehrmantraut, and Jesse flew to Mexico to have Jesse cook the signature blue meth for the Cartel's superlab, run by Benicio Fuentes. After Jesse successfully cooks a very pure batch on his own for the Cartel, Don Eladio brings them to his house and his capos celebrate at the same place Max Arciniega, Gus' former business partner, was killed. As a token of respect for the renewed business relationship, Gus brings Don Eladio a gift of incredibly fine tequila Zafiro Añejo, which the entire cartel drinks after Gus takes the first shot. It is actually poisoned; after Gus is escorted by Eladio's bodyguard Miguel to the bathroom, he forces himself to regurgitate the drink (he had already taken a capsule to prevent the major effects of the poison, once arriving at Don Eladio's place).

Outside by the pool, Don Eladio witnesses Benicio and at least nine capos/enforcers dropping dead, and he himself is suffering from the effects of the poison. Gaff is garroted by Mike as the butlers and girls start fleeing in panic. Gus steps over Miguel's corpse and stands before Don Eladio, who tries in vain to attack him but collapses face-first into the pool, dead. Mike then takes Don Eladio's nazar necklace from his corpse and, after Jesse kills Don Eladio's last henchman, the three manage to escape the hacienda. ("Salud")

Gus and Jesse go to Casa Tranquila where they visit Hector, whom Gus frequently harasses and taunts about the deaths of members of his family and friends from the cartel, owing to the fact that it was Hector who, on Don Eladio's orders, shot Gus' partner Max twenty years ago. During the meeting between the two enemies, Gus puts Don Eladio's necklace in Hector' pocket and lets him know of the deaths of Don Eladio, all the cartel capos and Hector's grandson Joaquin, who turned out to be the last henchman whom Jesse killed during their escape from Don Eladio's hacienda. After introducing Hector's grandson's killer to Hector, both men leave Hector, who cries in anger and is devastated as all of his friends and relatives are dead and he is completely alone and helpless. ("Crawl Space")

Don Eladio's death, as well as the deaths of all his Cartel allies would ultimately be avenged by his ally Hector who, with the aid of Walter White, kills Gus by suicide bombing him after luring him into a trap, leading to the destruction of his own drug empire as well. ("Face Off")

Gus watching as members of the cartel are poisoned ("Salud")

A photo of Don Eladio is shown on the DEA evidence board mapping Gus's drug empire. On his card, the DEA wrote that he had a "suspected connection to Fring operation, possibly related to recent violence in New Mexico." 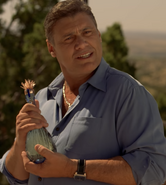 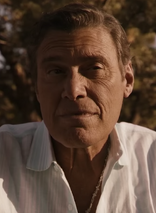 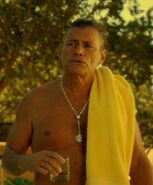 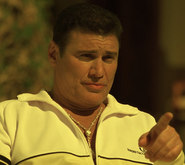 "The only reason you are alive and he is not...is because I know who you are."
―Don Eladio to Gus Fring.[src]

Retrieved from "https://breakingbad.fandom.com/wiki/Eladio_Vuente?oldid=104876"
Community content is available under CC-BY-SA unless otherwise noted.