View source
watch 01:55
Cobra Kai Season 4 - The Loop
Do you like this video?
Play Sound

The film chronicles the escape of Jesse Pinkman from captivity following the events of the Breaking Bad series finale.[3][4] It was released on Netflix on October 11, 2019, and on Blu-Ray and DVD in October 2020.

In an opening flashback, Jesse Pinkman meets with Mike Ehrmantraut on the bank of a river and tells him that he has decided to leave the drug business. They ask each other what they plan to do with the money they have collected. Mike says that if he were Jesse's age, he would move to Alaska and start his life anew. Jesse says that he would try to "set things right", but Mike regretfully tells him that changing his past is the one thing he cannot do.

In the present, immediately after escaping Jack Welker's compound, Jesse speeds away in Todd's El Camino. He is forced to hide in a driveway when he sees a line of police cars heading in his direction. Jesse then drives to Skinny Pete's house, where Skinny Pete and Badger are playing a video game. Skinny Pete initially doesn't recognize Jesse due to his haggard appearance. The duo help Jesse hide the El Camino and give him food and a place to sleep.

The following day, Skinny Pete and Badger are watching a news conference about the previous night's shooting when Jesse wakes and suffers a traumatic flashback to his captivity at the compound. In a panic, Jesse pulls his gun on Skinny Pete and Badger. The duo calm Jesse down and persuade him to take a shower and shave. Realizing that he has to leave Albuquerque, Jesse tears a page from Skinny Pete's phone book and contacts Old Joe, with the aim of getting rid of the El Camino.

Old Joe initially agrees to remove the El Camino, but the car's anti-theft device is activated, which law enforcement will trace. Old Joe flees. Thinking quickly, Skinny Pete comes up with a plan to distract the police by having Badger dump Pete's Ford Thunderbird near the Mexican border while Jesse is given Badger's Pontiac Fiero to escape. Skinny Pete further gives Jesse some cash and his hat to disguise himself. As Jesse drives away, he sees a massive police convoy driving in the opposite direction towards Skinny Pete's house.

In another flashback, Jesse sits in his cage at the compound when Todd Alquist enlists his help with an errand. The two drive to Todd's apartment, where Jesse helps Todd fit a truck canopy onto the El Camino. Inside, Jesse sees the body of Todd's cleaning lady, Sonia, who Todd murdered after she discovered drug money stashed inside one of his hollowed-out encyclopedias. Todd tells Jesse that he has an idea for a new hiding spot in the apartment for his money. The pair roll up Sonia's body in a carpet and bury it in a remote part of the desert. Jesse finds Todd's gun in his glove box and threatens him with it, but Todd manages to calmly talk him down from using it.

Back in the present, Jesse listens to a radio report about an unidentified woman whose fatal poisoning has been attributed to Walter White. Jesse drives to Todd's apartment, where he narrowly avoids being seen by a neighbor as he uses Todd's keys to enter. Jesse sees his mother and father being interviewed on television, urging him to turn himself in. He spends the entire night ransacking the apartment, but initially fails to find Todd's hiding spot. It is not until early the next morning that Jesse, by luck, discovers that Todd hid the money inside the door to his refrigerator.

Just as Jesse makes this discovery, two men in police jackets, Neil and Casey, arrive at the apartment. Jesse hides beneath an overturned mattress and pulls his gun on Casey, leading to a standoff between himself and Neil with Casey as a hostage. Neil convinces Jesse to surrender, only for Jesse to quickly realize that the two men are not actual cops, but criminals who are also searching for Todd's money. Jesse divulges the location of the money, but is forced to take only a third of it by Neil. After walking out of the apartment with the cash in trash bags, Jesse sees the logo for Neil's welding business on the side of his truck and realizes that he has seen him before at Jack's compound.

Using the torn phone book page, Jesse searches for the "Disappearer" who can secretly transport him out of the city and give him a new life. He comes across Best Quality Vacuum and sees the red minivan he saw in his previous encounter with the Disappearer parked behind the store. Inside, after awkwardly trying to remember the password, Jesse offers $125,000 to the Disappearer, Ed Galbraith, who agrees to help him again on the condition that he produce an additional $125,000 for the previous aborted transport. Unfortunately, Jesse comes up $1,800 short even with the money he got from Skinny Pete and Badger combined with Todd's money. When Ed turns him down, Jesse desperately threatens to stay inside the store until he changes his mind. Ed dials 9-1-1, which Jesse calls as a bluff until a police car pulls up outside. Jesse flees with his money while Ed gives a false description to the responding officers. Jesse phones Ed from his car and promises to get him the agreed-upon amount of money; Ed promises to keep their deal if he does.

That night, at the Pinkman house, Jesse's parents are washing dishes when Jesse calls them on the phone. Jesse tells his parents that they "did their best" and are not at fault for the choices which have brought him to his present situation. He further asks them to pick him up, ostensibly to turn himself in. Once his parents and some plainclothes police are lured away from the house, Jesse sneaks in and steals two guns from a safe in their closet. Before he leaves, Jesse finds the address of Neil's welding business in his parents' phone book. Jesse infiltrates the property right before a group of strippers are driven in to entertain Neil, Casey, and three of their friends.

In another flashback, Neil performs welding work on Jack's meth lab while Jesse, Todd and Kenny look on. Kenny, concerned that Jesse will make another escape attempt, expresses doubt that the metal frame Neil has constructed for Jesse's harness will last. He and Neil make a $50 wager on whether Jesse can break the frame, with Kenny forcing Jesse to run from one end of the lab to the other while still attached to the harness.

In the present, Jesse waits for the strippers to leave before he enters Neil's office and confronts him. Seeing that Jesse is armed with a .22 handgun, Neil agrees to give up his third of Todd's money if Jesse beats him in a duel. However, Neil is unaware of the second gun hidden in Jesse's jacket pocket, and is killed just as he tries to draw. Casey grabs his own weapon and attempts to shoot Jesse, which results in a gun battle that leaves Casey dead. Jesse forces the three remaining men to hand over their drivers' licenses and allows them to flee. Before he leaves with Neil's share of the money, Jesse rigs a bunch of propane tanks to explode, destroying Neil's property and covering his tracks.

In the penultimate flashback, Jesse talks to someone over the phone from a hotel room. He is revealed to be staying in the room next to Walter White's. The pair drive the RV to a cafe and have lunch. Walt is despondent when Jesse tells him that their latest batch of meth will take six months to sell, but Jesse assures him that his family will receive all of the money that is coming to them from the duo's meth cooking. The conversation turns to Jesse's future, with Walt encouraging him to go to college and study business or marketing. Walt tells Jesse that he is lucky that he didn't have to wait his whole life to do "something special."

In the present, Ed drives a moving van to a rest stop in the Alaskan mountains where an SUV is waiting. He collects Jesse and his luggage from a hidden compartment in the back of the van. Before they part, Ed quizzes Jesse on the details of his new identity as "Mr. Driscoll", while Jesse gives Ed a letter addressed to Brock Cantillo. As he drives away, Jesse recalls an earlier conversation with Jane Margolis, in which she disavows her philosophy of "going where the universe takes you" and states that it's better to make decisions for yourself. The film ends with Jesse smiling as he heads toward his new life. 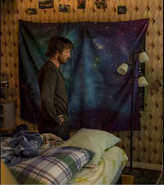 El Camino A Breaking Bad Movie Behind the Scenes Netflix