Alive
Clarence, aka "Man Mountain" is a small-time hoodlum who hires himself out for some protection jobs for Dr. Caldera.

Mike Ehrmantraut meets two other people in a parking structure as they are waiting for "Pryce" to show up. One of the people turns out to be the tall and towering Clarence, who remains silent during the meeting while the other is this arrogant and boisterous loudmouth who looks at Mike and thinks that Mike is not right for this job. As "Pryce" drives up and introduces himself, the loudmouth tells "Pryce" that Mike is not packing any weapons, and Mike then neutralizes the loudmouth and takes the weapons he finds useful. Clarence, seeing what Mike did to the loudmouth, runs away. ("Pimento")

Jimmy McGill hires Clarence along with Huell Babineaux to help him deal with three street punks who rob him when he was trying to sell burner phones. After Jimmy lures the punks into a dead-end alley, Clarence and Huell come up from behind the kids, pull their weapons and take the kids to a pinata warehouse, where the punks are bound, gagged and hanging upside down as Jimmy talks some sense into these kids while Clarence and Huell scare them by beating down the pinatas. The punks get the message and promise not to further harm Jimmy or his business and eventually, both Clarence and Huell take off their masks. ("Piñata")

Clarence is operating the churro cart while Saul is giving away cell phones and selling legal advice in a tent on a lot. ("Magic Man")

Clarence, now working as a bouncer, drives up to the Kandy Welding compound with a Hummer, accompanied by three prostitutes. He tells Neil Kandy what the hourly rate is, takes the payment and introduces the women to Neil and his friends. After the session is over, the ladies wake up a snoozing Clarence, tell him that it is time to go and they get back into the Hummer and leave the Kandy Welders yard. 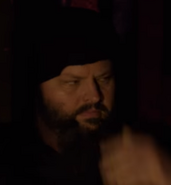 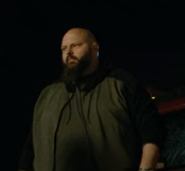 Retrieved from "https://breakingbad.fandom.com/wiki/Clarence?oldid=105044"
Community content is available under CC-BY-SA unless otherwise noted.